If you don't count Lamai (who is a cuisine unto herself anyway) Bangkok House is the main, authentic Thai restaurant in town. The others tend to have a different, lighter, flavor of Thai. Bangkok House is hot, intense and salty.

Their location at Saginaw and North Cedar makes them especially popular for take out. They are close to down town Lansing, and on the way to or from pretty much anywhere. I love to grab an aromatic, garlicky Pad Woon Sen for lunch, usually with an order of spring rolls. 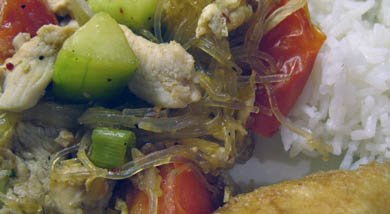 Pad Woon Sen is one of my standards to test out any Thai place. If it's boring, I'm suspicious. (Banyan Tree was an exception to this rule, but alas, they are gone.) It's a cross between a stir-fried noodle dish and a salad. Cooked up fast and hot, but with hunks of tomato and cucumber. The noodles are the clear, glassy bean threads, which are light and jiggly. This dish is usually served with rice on the side (as a Thai salad might be), and the flavor at Bangkok House is intense enough to require that rice. The Pad Thai is also good here (though I like the sweet and sour flavors of Lamai's better). Just remember that they don't really understand the concept of "mild" here -- it's closer to "medium". They do get "not hot at all" though.

Take out isn't all they've got, though, and this is a fine place for a full meal, which is what we had recently:

For appetizer, this is a great place for Satay. For those who don't know, Satay is a Malaysian dish that is commonly served in Thai restaurants in the U.S. It's meat -- usually pork, chicken or beef -- marinated and grilled on a stick. Here they serve it with a little table top grill, where you finish off the cooking yourself. (The meat is cooked, but you need a nice sear for it to taste right.)

It's served with two sauces, a rich peanut sauce made with coconut milk, and a refreshing cucumber sauce, made with a dressing of vinegar, lime and sugar. These sauces go together! You can pour them both over your meat, or eat some of one and then the other -- just make sure you taste them close together, because each really opens up the flavor of the other. 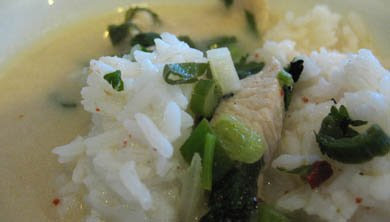 For soup we have the ever present Tom Ka Gai, or coconut chicken soup. It's good here, and we usually ask for some rice to be served with it, because the flavors of the coconut, lemongrass, ginger and lime are so intense. 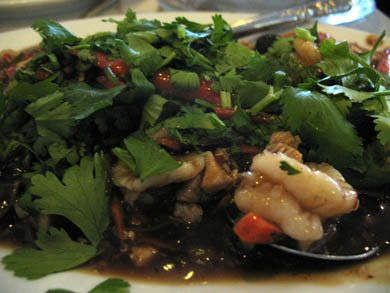 Finally the Pla Jian. This used to be served as a whole fish, but since Americans don't really like to deal with bones they now serve it as a large fillet, which has been scored, seasoned and deep-fried. It is then smothered in a sauce of ginger, mushrooms, shrimp and veggies, and topped with herbs. This dish is not very spicy -- the main heat comes from the ginger -- but it is very flavorful. It's also a big dish, and with the appetizers and soup, it's enough for two people of reasonable appetite, but if you want something else, you could go for a Yum salad: grilled beef on cucumber and herbs, with a sweet lime dressing -- no pun intended when I say it's yummy. For the adventurous, they have a lot of interesting seafood dishes, and frogs legs too. And for the less adventurous, they have a good selection of the usual curries and noodle dishes.

Their menu is listed at Restaurant Database.
Posted by Pitchlady at 7:05 PM No comments:

Two drive-bys and an update:

*There's a new deli that has moved into the old Mr. Taco building on Clippert, just west of Frandor. (This is a building which is back to back with the Wendy's on Homer.) They have "Corned Beef" written in large letters on the windows. Hmmm. It's also convenient to swing by before work. I'll likely give it a try next week.

*On Michigan Avenue, just east of the ball park -- in the block next to Claras, that has both the city shelter and several nightblubs, there's a little corner restaurant that has a lot of turnover -- there was a Caribbean place, Turkeyman, and Ballpark Franks. Now it has a sign that says "Authentic Mexican Food."

As for an update: I have pictures. Watch for reviews of Bangkok House and Hobies.
Posted by Pitchlady at 8:08 AM 4 comments: