A couple of quick bits about various places for not-good-for-you but good for your soul treats:

Fried fish and shrimp and onion rings: my favorite is Olympic Broil, which is in the old drive-in on Seymour Street in northwest Lansing. (Technically it's at 1320 N Grand River Ave, just north of the intersection of Grand River and Grand River. Below that intersection, the street is called Seymour. For those of us on the East Side, it's on the way to the airport.) They have great batter dipped fish and onion rings, as well as the usual burgers and fries and shrimp baskets and some Greek specialties. 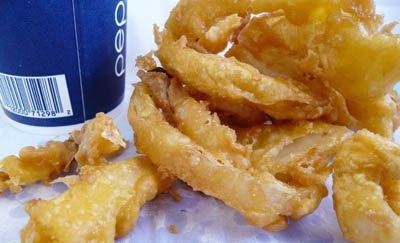 However, I also just tried the place called just "Fish and Chips" at 2418 E Michigan Ave, a few blocks west of Frandor. Their cod was pretty ordinary fast foodish, but the perch was great. The chip were greasy but big and thick, and though I didn't try the shrimp, I took a quick bit of their cocktail sauce and found that it wasn't just ketchup - there's real horseradish in there. I'll be checking out the whitefish and catfish later on, and give you a better review. Oh, and the hush puppies I had with my order were good too. (Which is not true of the last time I was there many years ago.) 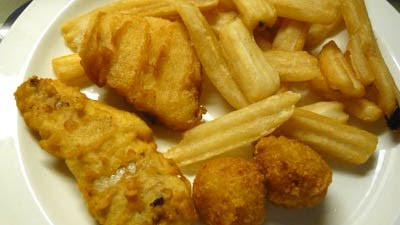 The soft-serve ice cream place in Old Town formerly known as Tate's Freeze is open again under the name of Arctic Corner. It's at 314 E. Grand River Ave. - that's the southwest corner of East Grand River and Center St., kitty corner from the soul food restaurant that used to be Vernadine's (and the old Lamai's before that). Here is a rather sloppy but thoroughly enjoyable Turtle Sundae that I had during a recent rainstorm. 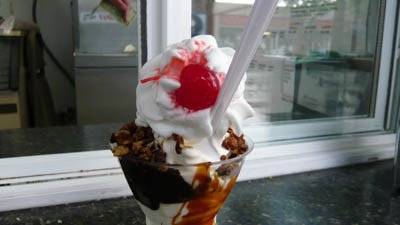 Of course, when it comes to old fashioned soft-serve, you can't beat the Tasty Twist at 1307 E. Grand River Ave. in East Lansing. We always stop for a small cone dipped in chocolate whenever we actually have room left in our stomachs. I don't have a picture because you can't set the cone down to take the picture as easily as a sundae. (Okay, that's an excuse, usually I'm too busy eating the cone to take the picture.)
Posted by The Eastside Food Geek at 7:23 PM 5 comments: