Editor's Note: Alas, it appears that Tacqueria Del Rey has gone out of business. I think they were probably just too close to El Oasis. If you'll note in the comments below, a reader believes that a middle eastern place may move into the location. 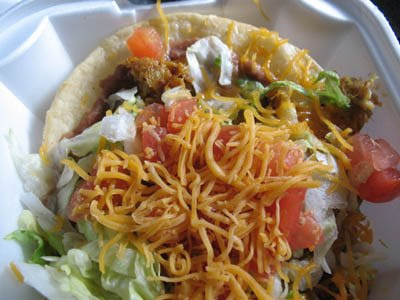 Tacqueria Del Rey has opened up on Michigan Avenue, where Mexico To Go used to be. While they don't have a lot of variety yet, they have that real tacqueria taste.

They tell me that this is their first restaurant, and the menu is still evolving. This means they didn't have a take out menu for me the last two times I stopped in, so I can only tell you about what I remember.

Good juicy carne guisada, which sometimes can be had as "lonches" - or a Mexican sub sandwich. (You can have any filling on that that you can have in a taco, but I recommend the guisada, because the juiciness goes with bread best.) I enjoy the pulled chicken, and I usually get a tostada. It supposedly comes with ground beef, but the beef they've put on it for me is seared and chopped - yum.

Sometimes they have Pan Dulce in the bakery counter as well. These big, lightly sweetened rolls have a colorful outer layer of a sweeter topping - still bread but more sugary. Pan dulce come in different shapes, but here they are mainly snail shell shaped.

Also, to go with your meal, don't forget the Jarritos, Mexican pop. I particularly recommend the tamarindo flavor to relieve your mouth if you go too heavy on the hot sauce.