I've spoken before about Lamai, but I haven't written a real review. (Well, I waxed poetic about Lamai's Pad Thai a long time ago.) One of the reasons is that I keep forgetting to get great pictures. Sorry about that. I'm too busy eating.

Thai Food From Lamai's Kitchen is not the sort of place you go for the great atmosphere and the perfect service. But it's the sort of place that elicits passion in her customers. At her old place up in north Lansing, she often didn't have any employees, so the customers would wait on each other. One day, we even were given menus and water by the heath inspector! Everybody, I mean everybody, was eager to pitch in and keep Lamai in business. 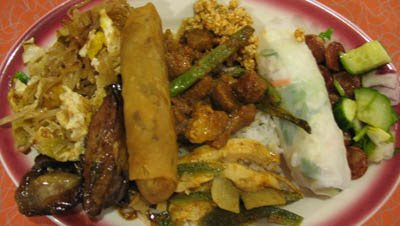 It's just that Lamai is a great cook. And since the customers were always waiting eagerly to serve themselves, she opened her Michigan Avenue restaurant as a buffet.

Don't expect stereotypical Thai food here. It's authentic, but it's also one hundred percent Lamai. She's like a Thai grandmother, determined to feed you well, no matter what the ingredients. (And at times, if she's not too busy in the kitchen, she will come out and nag you about being too thin, or not trying the best stuff on the buffet.) 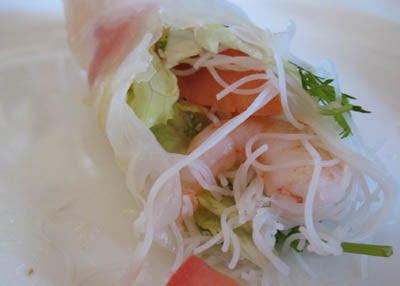 The first part of the buffet contains a selection of Thai salads, including her specialty Thai Fresh Eggrolls (pictured here). These are a little like the Vietnamese "spring roll", which is not fried, but wrapped in rice paper. Lamai's version, though, is filled with a lovely, light Thai salad, and are amazingly good with her special Fresh Eggroll Sauce. (Almost like a sour lemon syrup. It's yummy.) 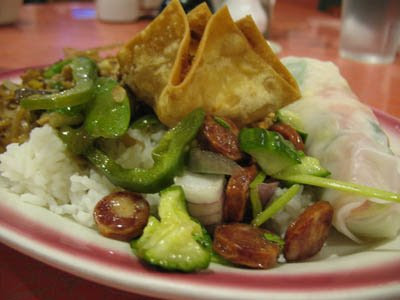 She has a number of great salads, my favorite of which is made with browned Chinese Sausage and Cucumber. And then there is the ground turkey seasoned heavily with lime and herbs. Oh my. Or the Green Apple and Carmelized Onions with Cashews.

She usually has a rich and sour soup of some kind, either a spicy and sour Tom Yam, or a rich and spicy Tom Kha Gai. On Fridays, she has a seafood buffet, and seafood Tom Yam is really really really tasty. Watch out for the large chunks of lemon grass in any of her soups. Lemon grass tastes great, but it's woody.

On the buffet proper, she usually has a couple of kinds of noodles, including her famous Pad Thai. Some stir-fries (I recommend the Ginger Chicken - which is the dish with mushrooms, green peppers and peapods), and miscellaneous dishes that occur to her. She has taken to making her own version of the stuffed eggplant in garlic sauce that you see at dim sum places. Hers is heartier and except on friday, usually stuffed with pork rather than shrimp.

At the end of the buffet she usually has a couple of choices of rich and spicy Thai curries -- usually a red chicken curry with bamboo shoots, a Penang Beef which is stewed in sweet coconut milk and some third dish often with green beans.

She also has her own unique version of Crab Rangoon -- not a sweet and goey as you find other places. And without crab. She uses carrot and green onion, and it tastes even better than crab so don't complain.

On Thursdays, she replaces some of the dishes with Vegetarian versions, and on Fridays, she has a Seafood buffet that has the most amazing little rounds of fried shrimp that you will ever taste. (Have them with the fresh eggroll sauce - heavenly!)

Thai Food From Lamai's Kitchen is on Michigan Avenue at Fairview (right next to the Gone Wired Cafe). Yeah, it is sometimes hard to park around there. Suck it up. The weather is getting warmer. You can park on the neighborhood streets and walk a little. And she's now OPEN SUNDAYS. (Note, she closes between 3pm and 5pm every day.)