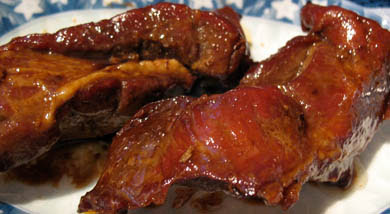 Barbecue pork (or Cha Siu -- which means "fork roast") is a basic ingredient for a lot of Chinese cooking. In a big city, you would be able to buy this lovely red-roasted pork, already cooked, by the pound. You know that taste in fried rice and lo mein and soups, and so many other dishes that you can't quite accomplish at home? It's probably from char siu.

This weekend I finally got the taste right on homemade roast pork. And now I have a freezer full for making char sui bao, or fried rice or soups or twice cooked pork....

The key here is the cut of pork. It can't be a lean cut. I used a Boston Butt Roast, cut into strips. "Country Style" spare ribs, or pork shoulder steaks are also good. The country style ribs are about the right shape and size to get the best surface area to meatiness ratio. (This is also important.)

The second key is the preparation method. You need to marinate the pork in the sauce for a couple hours. (I did about two.) Then when you roast it, you have to be sure that as much surface of the pork is exposed to the hot air as possible. I can tell you from experience that if the meat sits in its accumulated juices, it just isn't the same. In China, they hang the meat in the oven on hooks. Many cookbooks recommend putting them in a pan that has a roasting rack.

I didn't have a roasting rack, or hooks, but I had a pork roast and I wanted Char Sui! So I used a little tender loving care. I separated the pieces of meat so that they were not touching. (In this case, I put them in three small pyrex dishes -- but they probably could have been put in one really big on.)

Since the marinade has sugar and soy in it, the pan drippings are likely to burn. If you have a roasting rack this is easy to deal wiht by simply filling the pan below with water or broth. I simply made sure I watched the oven -- which was at a hot 425 degrees -- and every time I could smell that "pre-burning" smell, I poured in a very small amount of sherry into the pan -- about 1/8 of an inch. I started basting it with a souped up version of the marinade after the first fifteen minutes, and after another five or ten, I flipped the meat over, so the bottom side could get some love.

It probably took 45-60 minutes of roasting, and I turned the oven down later in the process. You could stretch the second half out a long time in a slow oven.

The Marinade (enough for approximately two pounds of meat):

The sugar and garlic are prone to burn, so you don't want so much of it in the marinade, but it is fine for basting later on in the process.

This marinade, btw, would also be good for chicken thighs and wings. You need something with enough fat if you are going to cook it as dry as the instructions here. But a lean meat would be okay if you cook it slower, and with more basting (and maybe more crowded in the pan to keep the moisture in).
Posted by Pitchlady at 6:01 PM 1 comment:

*SanSu sushi house in Hannah Plaza has moved. They're in the same building, but they have moved from the back to the front of the building. This is a better place for them, imho. They are a popular sushi joint, and this gives them more room and visibility, since they face Hagadorn Road now.

*Gung Hay Fat Choy! It's Chinese New Year on Thursday! Have a feast this week or weekend, as we end the year of the Boar and begin the year of the Rat.
Posted by Pitchlady at 5:57 PM No comments: